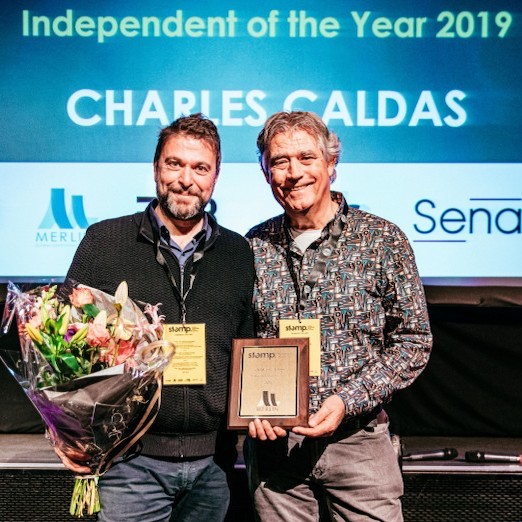 Dutch trade association STOMP has awarded Charles Caldas as Independent of the Year 2019 to honor him for his great work for independents in his role as CEO of Merlin; the global rights agency for the independent label sector.

“Charles has played a significant role in the evolution of the record industry from physical to digital products, from the outset. Especially by defending independent label rights and striving for a same level playing field, Charles has been of great value. Led by Charles, the independent music sector now has a big market share in the digital world.”

“As CEO, Charles Caldas has been a key figure for Merlin and its independent members for over a decade. Since the very beginning of the agency, Charles has been a driving force making an immense contribution to Merlin’s success.”

During Charles’ time at Merlin, the record industry evolved to embrace music streaming as a new format. Merlin has made deals with numerous key digital services like Spotify, YouTube Music, Facebook, Deezer, Alibaba, NetEase, Tencent and many more. During his 12 years as CEO, Caldas has connected nearly 900 members based in 66 different countries to Merlin. The agency now embodies more than 20.000 independent record labels and distributors.

Charles has played a huge role in protecting the rights of independent record labels and creating a level playing field. Led by Charles, the independent sector now enjoys a considerable share of the digital music market. The STOMP board has no doubt that Charles Caldas is the right person to receive the STOMP Independent of the Year Award 2019.”

Statement of the STOMP Board

About the STOMP Independent of the Year Award

The STOMP board invoked the Independent of the Year Award aiming to widely recognize the work of a person or an organization in the independent music industry in the past year. The STOMP board decides on who is to be awarded.

The STOMP Independent of the Year award was awarded for the first time in 2017. Dutch independent label Rotterdam Airlines was being awarded and praised for their strong hold on the Dutch spoken hiphop and urban music genre, challenging the majors who try to dominate the genre in the Dutch market. In 2018, Helen Smith was awarded the STOMP Independent of the Year Award for her work for independent labels in Europe as Executive Chair of IMPALA.

Merlin is the digital rights agency for the world’s independent label sector.

The organisation’s members command in excess of 12% of the digital recorded music market and embody more than 20,000 independent record labels and distributors from over 60 countries.

Merlin acts to ensure these companies have effective access to new and emerging revenue streams and that their rights are appropriately valued and protected.

Since commencing operations in May 2008, Merlin has licensed over 25 key digital services including Facebook, YouTube Music, Spotify, Deezer, Pandora, Alibaba, NetEase and Tencent, and has reached a number of high value copyright infringement settlements on behalf of its members.

Merlin has won ‘Independent Champion’ at the A2IM Libera Awards three times – in ‘15, ‘16 and ‘18. The company’s CEO, Charles Caldas, has been recognised by Billboard in its 2019 list of the 100 most influential people in the music business, for the second year running, while Merlin has been named as an advocate for the publication’s 2018 ‘Indie Power Players’.

Merlin has offices in London, New York and Tokyo, with a head office in Amsterdam.